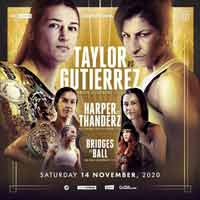 Review by AllTheBestFights.com: 2020-11-14, pretty good fight between Katie Taylor and Miriam Gutierrez: it gets three stars.
Both undefeated, the 2012 Olympic gold medalist, current Wbc, Ibf, Wba and Wbo champion Katie Taylor entered this fight with a perfect boxing record of 16-0-0 (6 knockouts) and she is ranked as the No.1 women’s lightweight in the world while her opponent, the interim Wba Lw champ Miriam Gutierrez, has a record of 13-0-0 (5 knockouts) and she entered as the No.11 in the same weight class. In their last three bouts Taylor has won over Christina Linardatou (Katie Taylor vs Christina Linardatou) and twice over Delfine Persoon (Katie Taylor vs Delfine Persoon I and Katie Taylor vs Delfine Persoon II) while Gutierrez has beat Bianka Nagy, Bianka Majlath and Keren Batiz. Gutierrez vs Taylor is valid for the WBC, WBA, IBF and WBO World female lightweight titles. Watch the video and rate this fight!

« 2020 MMA fight – Michal Materla vs Roberto Soldic – full fight Video KSW 56
2020 MMA fight – Paul Felder vs Rafael dos Anjos – fight Video UFC FN 183 »
HELP US!!! Since the CORONAVIRUS pandemic started, AllTheBestFights.com has struggled to survive! If you have enjoyed this website for the past 10 years, today we ask you for a little help: