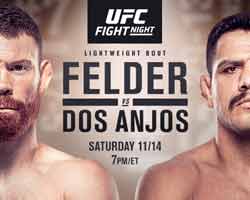 Review by AllTheBestFights.com: 2020-11-14, good fight between Paul Felder and Rafael dos Anjos: it gets three stars (UFC Fight of the Night).
The black belt in karate and tae-kwon-do Paul Felder (who replaces Islam Makhachev) entered this fight with a mma record of 17-5-0 (65% finishing rate) and he is ranked as the No.11 lightweight in the world but he comes off the loss against Dan Hooker (controversial split decision, Paul Felder vs Dan Hooker); before this bout, in 2019, he had beat James Vick (Paul Felder vs James Vick) and Edson Barboza (Paul Felder vs Edson Barboza 2).
His opponent, the black belt in Brazilian jiu-jitsu and former Ufc Lw champion Rafael dos Anjos, has an official record of 29-13-0 (52% finishing rate) and he entered as the No.10 welterweight but he won just one out of his last five bouts, against Kevin Lee last year (Rafael dos Anjos vs Kevin Lee); after this fight he has lost to Leon Edwards (Rafael dos Anjos vs Leon Edwards) and Michael Chiesa (Rafael dos Anjos vs Michael Chiesa). Dos Anjos vs Felder is the main event of the UFC Fight Night 183 (also known as UFC on ESPN+ 41 or UFC Vegas 14). Watch the video and rate this fight!