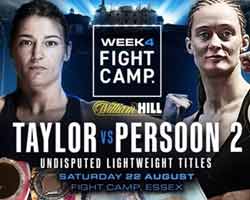 Review by AllTheBestFights.com: 2020-08-22, good pace between Katie Taylor and Delfine Persoon 2: it gets three stars.
The undefeated 2012 Olympic gold medalist, current Wbc, Ibf, Wba and Wbo champion Katie Taylor entered this fight with a perfect record of 15-0-0 (6 knockouts) and she is ranked as the No.1 lightweight in the world. In her last three bouts she has won over Rose Volante (Katie Taylor vs Rose Volante), Delfine Persoon (Katie Taylor vs Delfine Persoon) and Christina Linardatou (Katie Taylor vs Christina Linardatou).
Her opponent, the former Ibf and current Wbc Lw champ Delfine Persoon, has an official boxing record of 44-2-0 (18 knockouts) and she entered as the No.2 in the same weight class. She fought three times last year beating Melissa St Vil and Helen Joseph but between these two bouts she lost the first fight with Taylor (via majority decision). Persoon vs Taylor 2 is valid for the WBC, WBA, IBF and WBO World female lightweight titles; undercard of Dillian Whyte vs Alexander Povetkin. Watch the video and rate this fight!