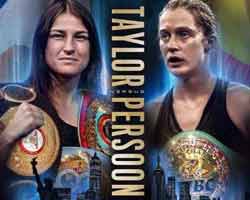 Review by AllTheBestFights.com: 2019-06-01, nice and close fight between Katie Taylor and Delfine Persoon: it gets three stars.

The undefeated 2012 Olympic gold medalist, current Ibf, Wba and Wbo champion Katie Taylor entered this fight with a perfect record of 13-0-0 (6 knockouts) and she is ranked as the No.2 women’s lightweight in the world. In her last three bouts she has won over Cindy Serrano, Eva Wahlstrom (Katie Taylor vs Eva Wahlstrom) and Rose Volante (Katie Taylor vs Rose Volante).
Her opponent, the former Ibf and current Wbc Lw champ Delfine Persoon, has an official boxing record of 43-1-0 (18 knockouts) and she entered as the No.1 in the same weight class. She suffered her only loss when she faced Zelda Tekin in 2010, since then she has won 34 consecutive bouts defeating Natalia Vanesa del Valle Aguirre, Judy Waguthii and Melissa St Vil in her last three. Taylor vs Persoon is valid for the IBF, WBA, WBC and WBO World Female lightweight titles (they also faced each other a second time on August 22, 2020 – Katie Taylor vs Delfine Persoon 2); undercard of Anthony Joshua vs Andy Ruiz Jr. Watch the video and rate this fight!