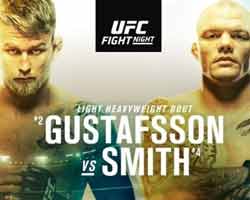 Review by AllTheBestFights.com: 2019-06-01, fight not so exciting between Alexander Gustafsson and Anthony Smith: it gets two stars (UFC Performance of the Night).

Alexander Gustafsson entered this fight with a professional mma record of 18-5-0 (78% finishing rate) and he is ranked as the No.4 light heavyweight in the world but he comes off the loss against current #1 light-Hw Jon Jones (via tko in December 2018, Jon Jones vs Alexander Gustafsson 2). Before this bout he had beat Glover Teixeira in 2017 (Alexander Gustafsson vs Glover Teixeira) and Jan Blachowicz in 2016 (Gustafsson vs Blachowicz).
His opponent, the black belt in Brazilian jiu-jitsu Anthony Smith, has an official record of 31-14-0 (90% finishing rate) and he entered as the No.5 in the same weight class. He also comes off the loss against Jon Jones, (via unanimous decision in March 2019, Jon Jones vs Anthony Smith) but in 2018 he had defeated Rashad Evans, Mauricio Shogun Rua (Mauricio Shogun Rua vs Anthony Smith) and Volkan Oezdemir (Volkan Oezdemir vs Anthony Smith). Gustafsson vs Smith is the main vent of UFC Fight Night 153 (UFC on ESPN+ 11). Watch the video and rate this fight!