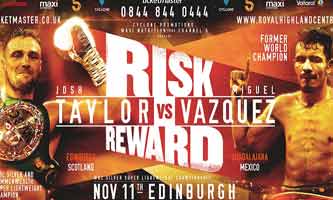 Review by AllTheBestFights.com: 2017-11-11, great fight between Josh Taylor and Miguel Vazquez: it gets three stars.

The undefeated Josh Taylor entered this fight with a perfect boxing record of 10-0-0 (9 KOs=90%) and he is ranked as the No.14 super lightweight in the world. He has already fought three times in 2017 winning over Alfonso Olvera, Warren Joubert and Ohara Davies (=Davies vs Taylor).
His opponent, the former Ibf Lw champion Miguel Vazquez, has an official record of 39-5-0 (15 knockouts) and he entered as the No.15 in the same weight class. He lost to Argenis Mendez in 2015 (=Vazquez vs Mendez) but then he has won four bouts beating Jose Daniel Ruiz in his last one. Taylor vs Vazquez is valid for the WBC Silver super lightweight title. Watch the video and rate this fight!