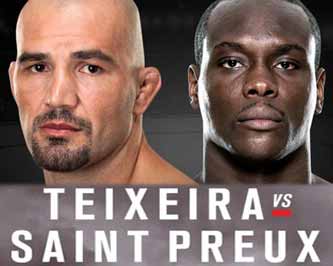 Review by AllTheBestFights.com: 2015-08-08, nice and tough fight between Glover Teixeira and Ovince St Preux: it gets three stars (UFC Fight of the Night).

The black belt in Bjj Glover Teixeira entered this fight with a professional mma record of 22-4-0 (86% finishing rate) and he is ranked as the No.7 light heavyweight in the world but he comes off two consecutive defeats: against #1 Jon Jones (=Jones vs Teixeira) and Phil Davis (=Teixeira vs Davis).
His opponent, Ovince St Preux, has an official record of 18-6-0 (78% finishing rate) and he entered as the No.9 in the same weight class. ‘OSP’ lost to Ryan Bader last year (=Bader vs St Preux) but then he has won over Mauricio ‘Shogun’ Rua (=Rua vs St Preux) and Patrick Cummins. Teixeira vs St Preux is the main event of UFC Fight Night 73. Watch the video and rate this fight!