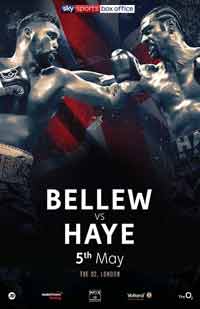 Review by AllTheBestFights.com: 2018-05-05, good fight between Martin Joseph Ward and James Tennyson: it gets three stars.

The undefeated Martin Joseph Ward entered this fight with a pro boxing record of 19-0-2 (9 knockouts) and he is ranked as the No.18 super featherweight in the world. He fought three times last year winning over Maxi Hughes, Anthony Cacace and Juli Giner.
His opponent, James Tennyson, has a record of 21-2-0 (17 KOs=81%) and he entered as the No.43 in the same weight class. He lost to Ryan Walsh in 2016 but then he has won five bouts beating Arnoldo Solano in 2018. Ward vs Tennyson is valid for the Commonwealth (British Empire), EBU European and WBA International super featherweight titles; undercard of Tony Bellew vs David Haye 2. Watch the video and rate this fight!

(Free embeddable video hosted on Youtube and not uploaded by AllTheBestFights)
https://www.youtube.com/watch?v=jAJcHI4TQM0