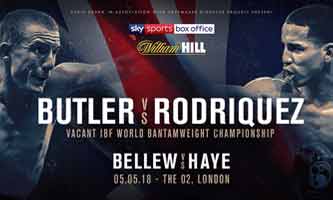 Review by AllTheBestFights.com: 2018-05-05, fight not so exciting between Paul Butler and Emmanuel Rodriguez: it gets two stars.

The former Ibf Bw champion Paul Butler entered this fight with a record of 26-1-0 (14 knockouts) and he is ranked as the No.6 bantamweight in the world. He suffered his only loss when he faced current #1 Bw Zolani Tete in 2015 (Tete vs Butler), since then he has won eight consecutive fights beating Carlos Ruben Dario Ruiz, Stuart Hall (Paul Butler vs Stuart Hall 2) and Jefferson Vargas in his last three.
His opponent, the undefeated former Olympian Emmanuel Rodriguez, has a perfect boxing record of 17-0-0 (12 knockouts) and he entered as the No.13 in the same weight class. He fought twice last year winning over Robinson Lavinanza and Giovanni Delgado. Butler vs Rodriguez is valid for the vacant IBF World bantamweight title; undercard of Tony Bellew vs David Haye 2. Watch the video and rate this fight!