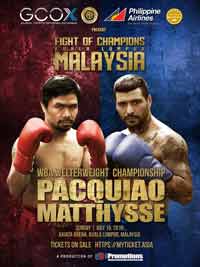 Review by AllTheBestFights.com: 2018-07-15, fight not so exciting between Edivaldo Ortega and Jhack Tepora: it gets two stars.

Edivaldo Ortega entered this fight with a pro boxing record of 26-1-1 (12 knockouts) and he is ranked as the No.15 featherweight in the world. He was defeated by Eduardo Ramirez in 2016 but then he has beat Tomas Rojas (Ortega vs Rojas) and Drian Francisco (Edivaldo Ortega vs Drian Francisco).
His opponent, the undefeated Jhack Tepora, has a perfect record of 21-0-0 (16 KOs=76%) and he entered as the No.26 in the same weight class. In his last three fights he has won over Galih Susanto, Yon Armed and Lusanda Komanisi. Ortega vs Tepora is valid for the interim WBA World featherweight title; undercard of Manny Pacquiao vs Lucas Matthysse. Watch the video and rate this fight!