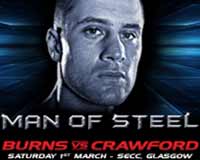 Review: 2014-03-01, good fight between Ricky Burns and Terence Crawford: it gets three stars. Ricky Burns entered this fight with a professional boxing record of 36-2-1 (11 knockouts) and he is ranked as the No.3 lightweight in the world, he suffered his last defeat in 2007 when he faced Carl Johanneson, since then, he collected 21 victories and one draw in his last fight, a controversial split decision draw against Raymundo Beltran (=Burns vs Beltran).
His opponent, the undefeated Terence Crawford, has a perfect record of 22-0-0 (16 knockouts) and he entered as the No.5 in the same weight class, he is at his first fight outside the USA and it is also his first world title shot; currently the #1 in this division is Miguel Vazquez. Burns vs Crawford is valid for the WBO lightweight title (Burns’ fifth defense). Watch the video and rate this fight!