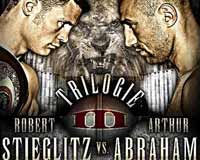 Review: 2014-03-01, pretty good fight with an exciting finish: the third fight between Robert Stieglitz and Arthur Abraham gets three stars. Robert Stieglitz entered this fight with a professional boxing record of 46-3-0 (26 knockouts) and he is ranked as the No.3 super middleweight in the world, he suffered his last defeat in the first fight against Abraham in 2012 (=Abraham vs Stieglitz) but last year in their rematch he managed to win via tko in the fourth round (=Abraham vs Stieglitz 2).
His opponent, Arthur Abraham, has an official record of 38-4-0 (28 knockouts) and he entered as the No.10 in the same weight class (currently the #1 in this division is Andre Ward). Stieglitz vs Abraham 3 is valid for the WBO super middleweight title (Stieglitz’s third defense); they also faced each other a fourth time on July 18, 2015 (=Abraham vs Stieglitz 4). Watch the video and rate this fight!