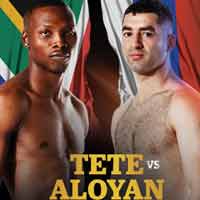 Review by AllTheBestFights.com: 2018-10-13, some good exchanges between Zolani Tete and Mikhail Aloyan but it is not enough to get three stars: it gets two.

The former Ibf super-Flw and current Wbo Bw champion Zolani Tete entered this fight with a professional boxing record of 27-3-0 (21 KOs=78%) and he is ranked as the No.3 bantamweight in the world (currently the #1 in this division is Luis Nery). He suffered his last loss when he faced Roberto Domingo Sosa in 2012 (Sosa vs Tete), since then he has won eleven consecutive bouts beating Arthur Villanueva (Tete vs Villanueva), Siboniso Gonya (Zolani Tete vs Siboniso Gonya) and Omar Andres Narvaez in his last three (Zolani Tete vs Omar Andres Narvaez).
His opponent, the two-time Olympian and World amateur champion Mikhail Aloyan, has a perfect record of 4-0-0 (0 knockouts) and he entered as the No.35 in the same weight class. In his professional bouts he has won over Yader Cardoza, Marvin Solano (Marvin Solano vs Mikhail Aloyan), Hermogenes Elizabeth Castillo and Alexander Espinoza. Tete vs Aloyan is the quarter-final of the World Boxing Super Series bantamweight tournament (WBSS – Muhammad Ali Trophy) and it is valid for the WBO World bantamweight title. Watch the video and rate this fight!