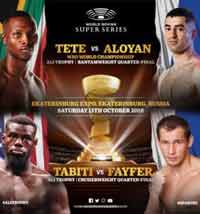 Review by AllTheBestFights.com: 2018-10-13, pretty good fight between Nadjib Mohammedi and Vladimir Shishkin: it gets three stars.

Nadjib Mohammedi entered this fight with a boxing record of 40-6-0 (23 knockouts) and he is ranked as the No.11 super middleweight in the world. He has fought twice in 2018 beating Hadillah Mohoumadi (Hadillah Mohoumadi vs Nadjib Mohammedi) and losing to Fedor Chudinov (controversial split decision, Fedor Chudinov vs Nadjib Mohammedi).
His opponent, the undefeated Vladimir Shishkin, has a perfect boxing record of 7-0-0 (4 knockouts) and he entered as the No.50 in the same weight class. In their last three bouts he has won over Konstantin Piternov, Siarhei Khamitski and Gasan Gasanov. Mohammedi vs Shishkin is valid for the WBA Continental super middleweight title; undercard of Zolani Tete vs Mikhail Aloyan. Watch the video and rate this fight!