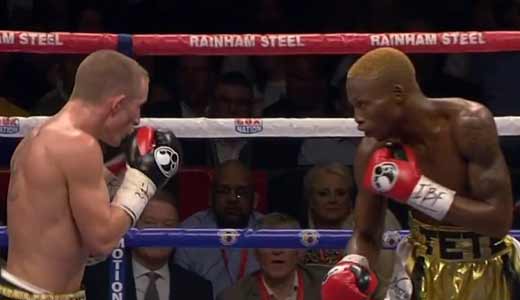 Review by AllTheBestFights.com: 2015-03-06, Zolani Tete vs Paul Butler gets four stars thanks to one of the best boxing knockouts of the year.

Zolani Tete entered this fight with a professional boxing record of 19-3-0 (16 KOs=84%) and he is ranked as the No.2 super flyweight in the world (currently the #1 in this division is Naoya Inoue). He suffered his last defeat in 2012 when he faced Roberto Domingo Sosa (losing via split decision, Sosa vs Tete), since then he has won three consecutive fights winning the vacant IBF super-Flw title in his last bout, against Teiru Kinoshita.
His opponent, the undefeated former Ibf bantamweight champion Paul Butler, has a perfect record of 17-0-0 (8 knockouts) and he entered as the No.21 in the same weight class; he fought three times in 2014 beating Oreste Bernabe Nieva (=Butler vs Nieva), Stuart Hall (=Hall vs Butler) and Ismael Garnica. Tete vs Butler is valid for the IBF World super flyweight title (Tete’s first defense). Watch the video and rate this fight!