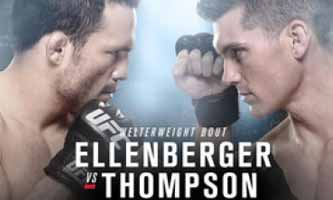 Review by AllTheBestFights.com: 2015-07-12, spectacular finish between Jake Ellenberger and Stephen Thompson: it is close to get four stars (UFC Performance of the Night).

Jake Ellenberger entered this fight with a professional mma record of 30-9-0 (80% finishing rate) and he is ranked as the No.15 welterweight in the world. He suffered three consecutive losses between 2013 and 2014, the last one against Kelvin Gastelum (=Ellenberger vs Gastelum), but he came back to win in 2015 beating Josh Koscheck (=Koscheck vs Ellenberger).
His opponent, the black belt in karate and jiu-jitsu Stephen Thompson, has an official record of 10-1-0 (60% finishing rate) and he entered as the No.29 in the same weight class. He suffered his only loss in 2012 when he faced Matt Brown but since then he has won four consecutive fights beating Patrick Cote in his last one. Ellenberger vs Thompson is the main event of the UFC – The Ultimate Fighter 21 Finale (American Top Team vs Blackzilians). Watch the video and rate this fight!