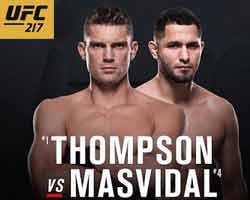 Review by AllTheBestFights.com: 2017-11-04, some good single shots between Stephen Thompson and Jorge Masvidal but it is not enough to get three stars: it gets two.

The black belt in karate and ju-jitsu Stephen Thompson entered this fight with a professional mma record of 13-2-1 (62% finishing rate) and he is ranked as the No.2 welterweight in the world. He beat Rory MacDonald in June 2016 (=MacDonald vs Thompson) but then he has faced twice current #1 Ufc Ww champion Tyron Woodley: their first bout has ended in a draw (=Woodley vs Thompson I) while in their second fight Thompson has lost by majority decision (=Woodley vs Thompson 2).
His opponent, Jorge Masvidal, has an official record of 32-12-0 (47% finishing rate) and he entered as the No.6 in the same weight class. He has already fought twice in 2017 defeating Donald Cerrone (=Cerrone vs Masvidal) and losing to Demian Maia (via split decision, Maia vs Masvidal). Thompson vs Masvidal is on the undercard of Michael Bisping vs Georges St Pierre – UFC 217. Watch the video and rate this fight!

Thompson’s next fight: Stephen Thompson vs Darren Till

Masvidal’s next fight: Darren Till vs Jorge Masvidal

(Free embeddable video hosted on Youtube and not uploaded by AllTheBestFights)
https://www.youtube.com/watch?v=kiuVq0AI70Q