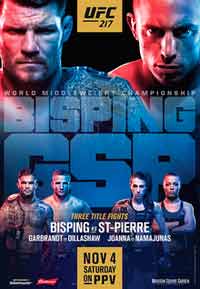 Review by AllTheBestFights.com: 2017-11-04, nice and tough exchanges between Alexey Oliynyk and Curtis Blaydes: it gets three stars.

The black belt in jiu-jitsu and 2005 world combat sambo champion Alexey Oleynik (he is 40 years old, 14 years older than Blaydes) entered this fight with a mma record of 55-10-1 (93% finishing rate) and he is ranked as the No.10 heavyweight in the world (currently the #1 in this division is Stipe Miocic). He lost to Daniel Omielanczuk in 2016 (via majority decision, Oleinik vs Omielanczuk) but then he has defeated Viktor Pesta (=Oleynik vs Pesta) and Travis Browne (=Browne vs Oleynik).
His opponent, Curtis Blaydes, has an official record of 8-1-0 (88% ko/tko victory rate – he has never won via submission) and he entered as the No.32 in the same weight class. He suffered his only loss when he faced Francis Ngannou last year, after this fight he has won over Cody East, Adam Milstead (then overturned in a no-contest beacause he tested positive for marijuana) and Daniel Omielanczuk (=Omielanczuk vs Blaydes). Blaydes vs Oliynyk is on the undercard of Michael Bisping vs Georges St Pierre – UFC 217. Watch the video and rate this fight!