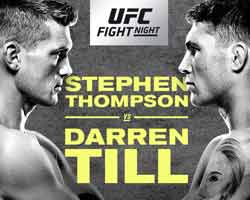 Review by AllTheBestFights.com: 2018-05-27, fight not so exciting between Stephen Thompson and Darren Till: it gets two stars.

The black belt in karate and ju-jitsu Stephen Thompson entered this fight with a pro record of 14-2-1 (57% finishing rate) and he is ranked as the No.3 welterweight in the world. ‘Wonderboy’ Thompson faced twice current #1 Ufc Ww champion Tyron Woodley between 2016 and 2017: their first bout ended in a draw (Woodley vs Thompson I) while in their second fight Thompson lost by majority decision (Woodley vs Thompson 2); after this bout he has beat Jorge Masvidal (Stephen Thompson vs Jorge Masvidal).
His opponent, the undefeated Darren Till, has an official mma record of 16-0-1 (75% finishing rate) and he entered as the No.14 in the same weight class. The only man who stopped him in a draw was Nicolas Dalby in 2015 (Dalby vs Till), after this fight he has won over Jessin Ayari, Bojan Velickovic and Donald Cerrone (Donald Cerrone vs Darren Till). Thompson vs Till is the main event of UFC Fight Night 130. Watch the video and rate this fight!

Till’s next fight: Tyron Woodley vs Darren Till

Thompson vs Till Fight Video:

(Free embeddable video hosted on Youtube and not uploaded by AllTheBestFights)
https://www.youtube.com/watch?v=Y5wZZ0YgtEc