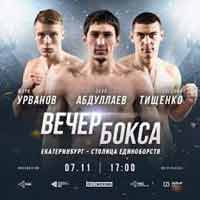 Review by AllTheBestFights.com: 2020-11-07, pretty good finish between Evgeny Tishchenko and John McCallum but it is not enough to get three stars: it gets two.
The undefeated 2016 Olympic heavyweight gold medalist Evgeny Tishchenko entered this fight with a perfect boxing record of 7-0-0 (5 knockouts) and he is ranked as the No.29 cruiserweight in the world. In his last three bouts he has won over Abraham Tabul, Issa Akberbayev (Evgeny Tishchenko vs Issa Akberbayev) and Marcos Antonio Aumada.
His opponent, John McCallum, has an official record of 12-1-0 (0 knockouts) but he is not ranked as he hasn’t fought since February 23, 2019 when he defeated Casey Blair. He suffered his only loss when he faced Leon McKenzie in 2015, since then he has won five consecutive fights. McCallum vs Tishchenko is valid for the vacant WBO European cruiserweight title; undercard of Roman Andreev vs Pavel Malikov. Watch the video and rate this fight!