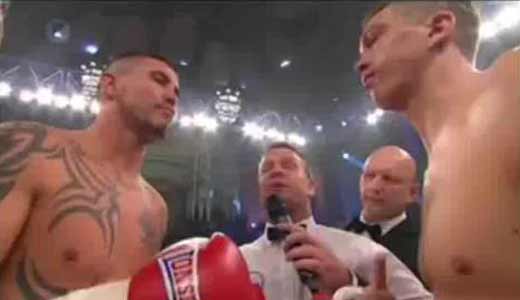 Review: 2014-05-17, epic fight with an aggressive start, tremendous exchanges and six knockdowns: Travis Dickinson vs Matty Clarkson is one of the best boxing fights of the year and it gets four stars (round five could be a candidate for “Round of the Year 2014”). Travis Dickinson entered this fight with a professional boxing record of 16-1-0 (6 knockouts) and he is ranked as the No.34 light heavyweight in the world, he suffered his only defeat in 2012 when he faced Bob Ajisafe, after that bout he has fought and won three times.
His opponent, Matty Clarkson, has an official record of 12-1-2 (3 knockouts) and he entered as the No.74 in the same weight class, he also suffered his only defeat in 2012 (against Courtney Fry), since then he has collected five consecutive wins. Dickinson vs Clarkson is valid for the BBBofC English light heavyweight title (Dickinson’s first defense). Watch the video and rate this fight!