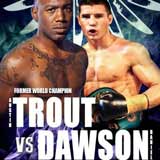 Review: 2014-08-22, exciting fight between Austin Trout and Daniel Dawson: it gets three stars. Austin Trout entered this fight with a professional boxing record of 26-2-0 (14 knockouts) and he is ranked as the No.8 light middleweight in the world but he lost his last two fights: against #1 Saul “Canelo” Alvarez (=Alvarez vs Trout) and #2 Erislandy Lara (=Lara vs Trout).
His opponent, Daniel Dawson, has an official record of 40-3-1 (26 knockouts) and he entered as the No.78 in the same weight class, two out of his three defeats occurred in world-title fights: against Daniel Geale in 2007 and Serhiy Dzinziruk in 2010; since then he has collected six victories, one draw and one defeat (against Frank LoPorto). Trout vs Dawson is the main event of the night. Watch the video and rate this fight!