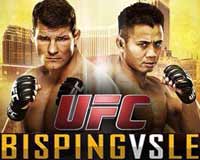 Review: 2014-08-23, nice and tough fight between Michael Bisping and Cung Le: it gets three stars (UFC Performance of the Night). Michael Bisping entered this fight with a professional mma record of 24-6-0 (75% finishing rate) and he is ranked as the No.13 middleweight in the world, but he lost three out of his last five bouts: against Chael Sonnen in 2012 (=Sonnen vs Bisping), Vitor Belfort in 2013 (=Belfort vs Bisping) and Tim Kennedy in 2014 (=Bisping vs Kennedy).
His opponent, the 42-year-old black belt in taekwondo, judo and Bjj Cung Le (7 years older than Bisping), has an official record of 9-2-0 (89% finishing rate) but he is not ranked as he hasn’t fought since November 10, 2012 when he defeated Rich Franklin with a spectacular knockout (4-stars-fight Franklin vs Cung Le). Bisping vs Le is the main event of UFC Fight Night 48. Watch the video and rate this fight!