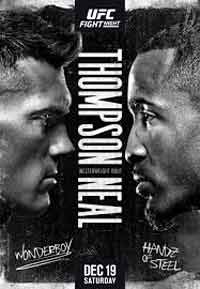 Review by AllTheBestFights.com: 2020-12-19, fight not particularly good between Marcin Tybura and Greg Hardy: it gets two stars – UFC Performance of the Night (take a look at our ranking of the best mma fights of 2020).
The black belt in Bjj and former M-1 Global Hw champion Marcin Tybura entered this fight with a pro mma record of 20-6-0 (65% finishing rate) and he is ranked as the No.13 heavyweight in the world. He lost twice last year, against Shamil Abdurakhimov (Marcin Tybura vs Shamil Abdurakhimov) and Augusto Sakai, but then he has won over Sergey Spivak, Maxim Grishin (Marcin Tybura vs Maxim Grishin) and Ben Rothwell (Marcin Tybura vs Ben Rothwell).
His opponent, the former American football NFL defensive end Greg Hardy, has an official mma record of 7-2-0 (86% ko/tko victory rate – he has never won via submission) and he entered as the No.45 in the same weight class. He lost to Alexander Volkov last year (Alexander Volkov vs Greg Hardy) but he came back to win in 2020 beating Yorgan De Castro (Greg Hardy vs Yorgan De Castro) and Maurice Greene. Hardy vs Tybura is on the undercard of Stephen Thompson vs Geoff Neal – UFC Fight Night 183 (also known as UFC on ESPN+ 41 or UFC Vegas 17). Watch the video and rate this fight!