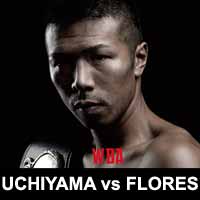 Review by AllTheBestFights.com: 2015-12-31, Takashi Uchiyama vs Oliver Flores gets three stars only thanks to a good finish.

The undefeated Takashi Uchiyama entered this fight with a professional boxing record of 23-0-1 (19 KOs=83%) and he is ranked as the No.1 super featherweight in the world. The only man who stopped him in a draw was Michael Farenas in 2012, since then he has won five bouts beating Jomthong Chuwattana in his last one (=Uchiyama vs Chuwatana).
His opponent, Oliver Flores, has an official record of 27-1-2 (17 knockouts) and he entered as the No.86 lightweight. He lost to Miguel Berchelt in 2012 but then he has won four consecutive fights. Uchiyama vs Flores is valid for the WBA Super World super featherweight title (held by Uchiyama). Watch the video and rate this fight!