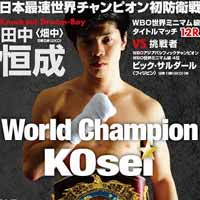 Review by AllTheBestFights.com: 2015-12-31, good performance by both boxers: Kosei Tanaka vs Vic Saludar gets three stars.

The undefeated 20-year-old Kosei Tanaka (five years younger than Saludar) entered this fight with a perfect boxing record of 5-0-0 (2 knockouts) and he is ranked as the No.6 minimumweight in the world (currently the #1 in this division is Wanheng Menayothin). He has fought once in 2015 winning the vacant Wbo belt against Julian Yedras (=Tanaka vs Yedras).
His opponent, Vic Saludar, has an official record of 11-1-0 (9 KOs=82%) and he entered as the No.35 in the same weight class. His only loss occurred in 2013 when he fractured his hand against Powell Balaba, since then he has won nine consecutive fights. Tanaka vs Saludar is valid for the WBO World minimumweight title (Tanaka’s first defense). Watch the video and rate this fight!