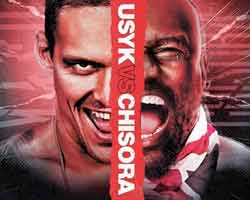 Review by AllTheBestFights.com: 2020-10-31, pretty good fight between Oleksandr Usyk and Dereck Chisora: it gets three stars.
The undefeated 2012 Olympic heavyweight gold medalist, former Wbo, Wbc, Wba and Ibf champion Oleksandr Usyk entered this fight with a perfect boxing record of 17-0-0 (13 KOs=76%) and he is ranked as the No.5 heavyweight in the world (currently the #1 in this division is Tyson Fury). In his last three bouts he has won over Murat Gassiev (Oleksandr Usyk vs Murat Gassiev), Tony Bellew (Oleksandr Usyk vs Tony Bellew) and Chazz Witherspoon (Oleksandr Usyk vs Chazz Witherspoon).
His opponent, Dereck Chisora, has a record of 32-9-0 (23 knockouts) and he entered as the No.9 in the same weight class. He lost the rematch with Dillian Whyte in 2018 (Dillian Whyte vs Dereck Chisora 2) but then he has won three fights beating Artur Szpilka (Dereck Chisora vs Artur Szpilka) and David Price in his last two (Dereck Chisora vs David Price). Chisora vs Usyk is the main event of the evening. Watch the video and rate this fight!

(Free embeddable video hosted on Youtube/Dailymotion/Ok.ru and not uploaded by AllTheBestFights)