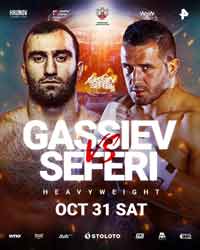 Review by AllTheBestFights.com: 2020-10-31, disappointing fight between Murat Gassiev and Nuri Seferi: it gets two stars.
The former Wba and Ibf Cw champion Murat Gassiev entered this fight with a professional boxing record of 26-1-0 (19 knockouts) but he is not ranked as he hasn’t fought since July 21, 2018 when he suffered his first defeat against Oleksandr Usyk (Oleksandr Usyk vs Murat Gassiev); before this bout he had beat Yunier Dorticos in February 2018 (Murat Gassiev vs Yunier Dorticos) and Krzysztof Wlodarczyk in 2017 (Gassiev vs Wlodarczyk).
His opponent, Nuri Seferi (who replaces his younger brother Sefer Seferi), has an official record of 41-9-0 (23 knockouts) and he entered as the No.128 cruiserweight. He lost to Taylor Mabika in 2018 but then he has won over Rad Rashid and Mazen Girke. Seferi vs Gassiev is the main event of the evening (Gassiev’s heavyweight debut). Watch the video and rate this fight!