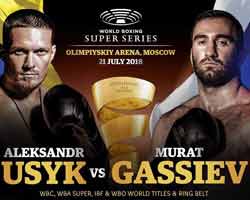 Review by AllTheBestFights.com: 2018-07-21, great performance by the winner but the fight was not so exciting: Oleksandr Usyk vs Murat Gassiev gets two stars.

Both undefeated, the 2012 Olympic heavyweight gold medalist and current Wbo, Wbc champion Oleksandr Usyk entered this fight with a perfect boxing record of 14-0-0 (11 KOs=79%) and he is ranked as the No.1 cruiserweight in the world while his opponent, the Ibf and Wba Cw champ Murat Gassiev, has an official record of 26-0-0 (19 knockouts) and he entered as the No.3 in the same weight class. In their last three bouts Usyk has beat Michael Hunter (Usyk vs Hunter), Marco Huck (Usyk vs Huck) and Mairis Briedis (Oleksandr Usyk vs Mairis Briedis) while Gassiev has defeated Denis Lebedev (Lebedev vs Gassiev), Krzysztof Wlodarczyk (Gassiev vs Wlodarczyk) and Yunier Dorticos (Murat Gassiev vs Yunier Dorticos). Usyk vs Gassiev is valid for the IBF, WBA, WBC, WBO World cruiserweight titles and it is the final of the World Boxing Super Series Cw tournamet. Watch the video and rate this fight!

(Free embeddable video hosted on Youtube and not uploaded by AllTheBestFights)
https://www.youtube.com/watch?v=ViPs_UOgZds