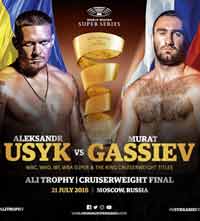 Review by AllTheBestFights.com: 2018-07-21, one sided fight between Mairis Briedis and Brandon Deslaurier: it gets two stars.

The former Wbc Cw champion Mairis Briedis entered this fight with a pro record of 23-1-0 (18 KOs=78%) and he is ranked as the No.2 cruiserweight in the world but he comes off the loss against current #1 Oleksandr Usyk (Oleksandr Usyk vs Mairis Briedis). Before this bout, in 2017, he had won over Marco Huck (Huck vs Briedis) and Mike Perez (Briedis vs Perez).
His opponent, Brandon Deslaurier, has an official boxing record of 11-1-1 (1 knockout) and he entered as the No.94 in the same weight class. He suffered his only loss when he faced Franck Acho in 2015, since then he has won nine consecutive fights beating Besarion Khutuashvili in 2018. Briedis vs Deslaurier is on the undercard of Oleksandr Usyk vs Murat Gassiev. Watch the video and rate this fight!