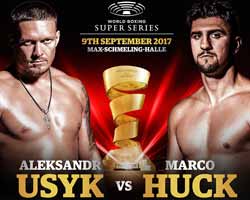 The undefeated 2012 Olympic heavyweight gold medalist and current Wbo champion Oleksandr Usyk entered this fight with a perfect boxing record of 12-0-0 (10 KOs=83%) and he is ranked as the No.1 cruiserweight in the world. Between 2016 and 2017 he has beat Krzysztof Glowacki (=Glowacki vs Usyk), Thabiso Mchunu (=Usyk vs Mchunu) and Michael Hunter (=Usyk vs Hunter).
His opponent, the former Wbo and Ibo Cw champion Marco Huck, has an official record of 40-4-1 (27 knockouts) and he entered as the No.7 in the same weight class but he lost two out of his last four fights, against Krzysztof Glowacki in 2015 (=Huck vs Glowacki) and Mairis Briedis in 2017 (=Huck vs Briedis). Between these two bouts he had won over Ola Afolabi (=Afolabi vs Huck 4) and Dmytro Kucher (=Huck vs Kucher). Oleksandr Usyk vs Marco Huck is the quarter final of the World Boxing Super Series Cw tournamet and it is valid for the WBO World cruiserweight title (Usyk’s third defense). Watch the video and rate this fight!

(Free embeddable video hosted on Youtube and not uploaded by AllTheBestFights)
https://www.youtube.com/watch?v=5MOtRBrnupY