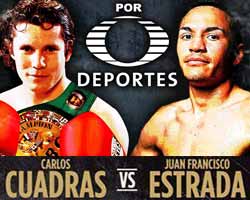 Review by AllTheBestFights.com: 2017-09-09, great performance by both boxers: Carlos Cuadras vs Juan Estrada gets three stars.

The former Wbc super-Flw champion Carlos Cuadras entered this fight with a professional boxing record of 36-1-1 (27 knockouts) and he is ranked as the No.4 super flyweight in the world (currently the #1 in this division is Srisaket Sor Rungvisai). ‘Principe’ Cuadras lost to Roman Gonzalez last year (4-stars fight, Cuadras vs Gonzalez) but he came back to win in 2017 beating David Carmona (=Cuadras vs Carmona).
His opponent, the former Wbo and Wba Flw champion Juan Francisco Estrada, has an official record of 35-2-0 (25 knockouts) and he entered as the No.6 in the same weight class. He also suffered his last loss when he faced ‘Chocolatito’ Gonzalez, but it was in 2012 (=Gonzalez vs Estrada), since then he has collected nine consecutive victories beating Anuar Salas in his last one (=Estrada vs Salas). Juan Francisco Estrada vs Carlos Cuadras is on the undercard of Srisaket Sor Rungvisai vs Roman Gonzalez 2; they also faced each other a second time on October 23, 2020 (Juan Francisco Estrada vs Carlos Cuadras 2). Watch the video and rate this fight!