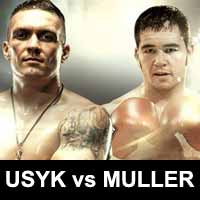 Review by AllTheBestFights.com: 2015-08-29, pretty good finish between Oleksandr Usyk and Johnny Muller but it is not enough to get three stars: it gets two.

The 2012 Olympic heavyweight gold medalist Oleksandr Usyk entered this fight with a perfect boxing record of 7-0-0 (7 KOs=100%) and he is ranked as the No.8 cruiserweight in the world (currently the #1 in this division is Grigory Drozd). He has already fought once in 2015 beating Andrey Knyazev (=Usyk vs Knyazev).
His opponent, Johnny Muller, has an official record of 19-4-2 (13 knockouts) and he entered as the No.25 in the same weight class. He suffered his last loss in 2014, against Doudou Ngumbu, but then he has won three consecutive fights defeating Mateusz Masternak in his last bout. Usyk vs Muller is valid for the WBO Inter-Continental cruiserweight title. Watch the video and rate this fight!