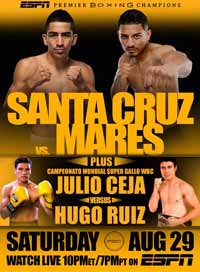 Review by AllTheBestFights.com: 2015-08-29, good fight between Julio Ceja and Hugo Ruiz: it gets three stars.

Julio Ceja entered this fight with a pro boxing record of 29-1-0 (26 KOs=90%) and he is ranked as the No.12 bantamweight in the world. He suffered his only loss in 2013 when he faced Jamie McDonnell (via majority decision, McDonnell vs Ceja), since then he has won five consecutive bouts beating Oscar Blanquet in his last one (=Ceja vs Blanquet).
His opponent, Hugo Ruiz, has a record of 35-2-0 (31 KOs=89%) and he entered as the No.26 super bantamweight. ‘Cuatito’ Ruiz suffered his last defeat in 2012, against Koki Kameda (via split decision), but after this bout he has won four consecutive fights. ‘Pollito’ Ceja vs Ruiz is valid for the interim WBC World super bantamweight title; undercard of Leo Santa Cruz vs Abner Mares. Watch the video and rate this fight!

Their next fight: Julio Ceja vs Hugo Ruiz 2