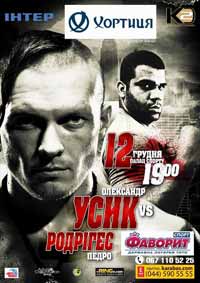 Review by AllTheBestFights.com: 2015-12-12, good fight between Oleksandr Usyk and Pedro Rodriguez: it gets three stars.

The 2012 Olympic heavyweight gold medalist Oleksandr Usyk entered this fight with a perfect boxing record of 8-0-0 (8 KOs=100%) and he is ranked as the No.6 cruiserweight in the world (currently the #1 in this division is Grigory Drozd). He has fought twice in 2015 beating Andrey Knyazev (=Usyk vs Knyazev) and Johnny Muller (=Usyk vs Muller).
His opponent, Pedro Rodriguez, has an official record of 22-1-0 (19 KOs=86%) and he suffered his only loss in 2012 when he faced Magomed Abdusalamov, since then he has won 14 consecutive fights. Usyk vs Rodriguez is valid for the WBO Inter-Continental cruiserweight title. Watch the video and rate this fight!