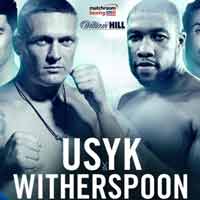 Review by AllTheBestFights.com: 2019-10-12, some good exchanges between Oleksandr Usyk and Chazz Witherspoon but it is not enough to get three stars: it gets two.

The undefeated 2012 Olympic heavyweight gold medalist, former Wbo, Wbc, Wba and Ibf champion Oleksandr Usyk entered this fight with a perfect boxing record of 16-0-0 (12 KOs=75%) and he is ranked as the No.4 heavyweight. In his last three bouts he has won over Mairis Briedis (Oleksandr Usyk vs Mairis Briedis), Murat Gassiev (Oleksandr Usyk vs Murat Gassiev) and Tony Bellew (Oleksandr Usyk vs Tony Bellew).
His opponent, Chazz Witherspoon (who replaces Tyrone Spong, who failed multiple drug tests), has a record of 38-3-0 (29 KOs=76%) and he entered as the No.74 in the same weight class. He suffered his last loss when he faced Seth Mitchell in 2012 (Seth Mitchell vs Chazz Witherspoon), since then he has won eight consecutive bouts beaing Santander Silgado in 2019. Usyk vs Witherspoon is the main event of the evening (Usyk’s debut in the heavyweight division). Watch the video and rate this fight!