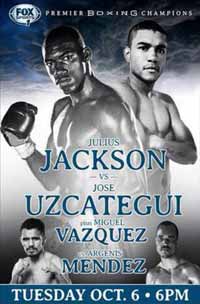 Review by AllTheBestFights.com: 2015-10-06, entertaining fight between Jose Uzcategui and Julius Jackson: it gets three stars.

Jose Uzcategui entered this fight with a professional boxing record of 23-1-0 (19 KOs=83%) and he is ranked as the No.16 super middleweight in the world. He suffered his first loss in 2014, when he faced Matt Korobov (=Korobov vs Uzcategui), but he came back to win in 2015 beating Daniel Eduardo Yocupicio.
His opponent, the undefeated Julius Jackson, has a perfect record of 19-0-0 (15 KOs=79%) and he entered as the No.66 in the same weight class. He fought twice last year winning over Crispulo Javier Andino and Jonathan Nelson. ‘Bolivita’ Uzcategui vs Jackson is the main event of the evening. Watch the video and rate this fight!