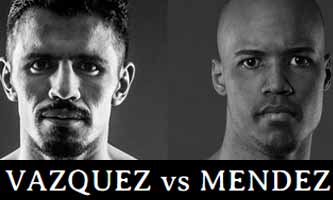 Review by AllTheBestFights.com: 2015-10-06, disappointing fight between Miguel Vazquez and Argenis Mendez: it gets two stars.

The former IBF Lw champion Miguel Vazquez entered this fight with a pro boxing record of 35-4-0 (13 knockouts) and he is ranked as the No.6 lightweight in the world while his opponent, the former Ibf super-Fw champion Argenis Mendez, has a record of 22-3-1 (12 knockouts) and he entered as the No.14 in the same weight class (currently the #1 in this division is Omar Figueroa Jr). Both boxers lost once in 2014 but then they came back to win in 2015: Vazquez was defeated by Mickey Bey (=Vazquez vs Bey) and then he won over Jerry Belmontes while Mendez lost the rematch with Rances Barthelemy (=Mendez vs Barthelemy 2) and then he beat Daniel Evangelista Jr. ‘Titere’ Vazquez vs Mendez is on the undercard of Jose Uzcategui vs Julius Jackson. Watch the video and rate this fight!