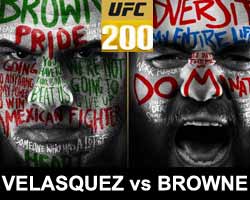 Review by AllTheBestFights.com: 2016-07-09, nice exchanges between Cain Velasquez and Travis Browne: it gets three stars (UFC Performance of the Night).

The black belt in Bjj and former Ufc champion Cain Velasquez entered this fight with a professional record of 13-2-0 (85% ko/tko victory rate – he has never won via submission) and he is ranked as the No.4 heavyweight in the world (currently the #1 in this division is Stipe Miocic). He fought just once in the last two years losing the Ufc Hw title against Fabrício Werdum (=Velasquez vs Werdum).
His opponent, Travis Browne, has a mma record of 18-3-1 (89% finishing rate) and he entered as the No.8 in the same weight class. He lost to Andrei Arlovski in 2015 (=Arlovski vs Browne) but he came back to win in 2016 defeating Matt Mitrione (=Browne vs Mitrione). Velasquez vs Browne is on the undercard of Miesha Tate vs Amanda Nunes – UFC 200. Watch the video and rate this fight!