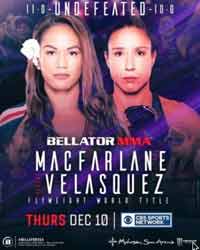 Review by AllTheBestFights.com: 2020-12-10, very boring fight between Ilima-Lei Macfarlane and Juliana Velasquez: it gets one star (take a look at our ranking of the best mma fights of 2020).
Both undefeated, the Bellator Flw champion Ilima-Lei Macfarlane entered this fight with a perfect mma record of 11-0-0 (73% finishing rate) and she is ranked as the No.8 women’s flyweight in the world while her opponent, Juliana Velasquez, has an official record of 10-0-0 (50% finishing rate) and she entered as the No.15 in the same weight class. In their last three fights Macfarlane has won over Valerie Letourneau (Ilima-Lei Macfarlane vs Valerie Letourneau), Veta Arteaga (Ilima-Lei Macfarlane vs Veta Arteaga) and Kate Jackson while Velasquez has beat Alejandra Lara, Kristina Williams and Bruna Ellen. Velasquez vs Macfarlane, main event of the Bellator 254, is valid for the Bellator women’s flyweight title (Macfarlane’s fifth defense). Watch the video and rate this fight!