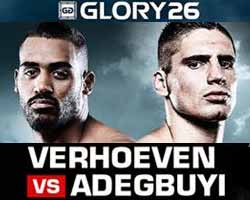 Rico Verhoeven entered this fight with a professional kickboxing record of 46-10-1 (11 knockouts) and he is ranked as the No.1 heavyweight in the world. He has already fought three times in 2015 losing to Andrei Herasimchuk (=Verhoeven vs Herasimchuk) but then he has beat Errol Zimmerman (=Verhoeven vs Zimmerman 3) and Benjamin Adegbuyi (in their first fight, Verhoeven vs Adegbuyi I).
His opponent, Benjamin Adegbuyi, has an official record of 22-3-0 (15 knockouts) and he entered as the No.3 in the same weight class. After losing against Verhoeven in June, he has won three consecutive bouts beating Jahfarr Wilnis in the final of the Glory Hw contender tournament (=Adegbuyi vs Wilnis). Verhoeven vs Adegbuyi 2, main event of Glory 26, is valid for the Glory heavyweight title (held by Verhoeven). Watch the video and rate this fight!