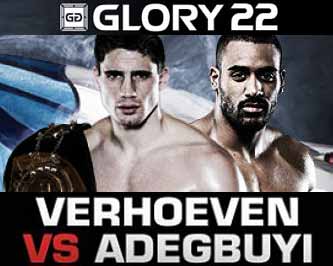 Review by AllTheBestFights.com: 2015-06-05, nice and tough fight between Rico Verhoeven and Benjamin Adegbuyi: it gets three stars.

Rico Verhoeven entered this fight with a professional kickboxing record of 45-10-1 (11 knockouts) and he is ranked as the No.1 heavyweight in the world. He has already fought twice in 2015 losing to Andrei Herasimchuk (=Verhoeven vs Herasimchuk) but then he beat Errol Zimmerman in their third fight (=Verhoeven vs Zimmerman 3).
His opponent, Benjamin Adegbuyi, has an official record of 19-2-0 (13 knockouts) and he entered as the No.4 in the same weight class. He suffered his last loss in 2012 when he faced Pavel Zhuravlev (=Zhuravlev vs Adegbuyi), since then he has collected nine consecutive victories winning the Glory Hw title eliminator against Hesdy Gerges and beating Daniel Lentie in his last fight (=Adegbuyi vs Lentie). Verhoeven vs Adegbuyi, main event of Glory 22, is valid for Glory heavyweight title (held by Verhoeven). Watch the video and rate this fight!