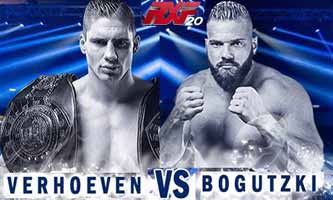 Review by AllTheBestFights.com: 2015-10-19, fight not particularly good between Rico Verhoeven and Viktor Bogutzki: it gets two stars.

The Glory Hw champion and #1 kickboxing heavyweight in the world Rico Verhoeven makes his mma debut in this fight against Viktor Bogutzki, who has an official mma record of 0-1-0. Verhoeven has already fought three times in 2015 as a kickboxer losing to Andrei Herasimchuk (=Verhoeven vs Herasimchuk) but then he has won over Errol Zimmerman (=Verhoeven vs Zimmerman 3) and Benjamin Adegbuyi (=Verhoeven vs Adegbuyi). Verhoeven vs Bogutzki is the main event of Romanian Xtreme Fighting 20 – RXF 20. Watch the video and rate this fight!