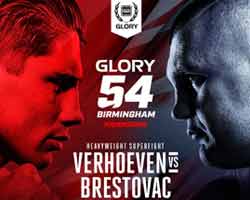 Review by AllTheBestFights.com: 2018-06-02, disappointing fight between Rico Verhoeven and Mladen Brestovac 2: it gets two stars.

The Glory Hw champion Rico Verhoeven entered this fight with a professional kickboxing record of 53-10-1 (16 knockouts) and he is ranked as the No.1 heavyweight in the world. He lost to Andrei Herasimchuk in 2015 (Verhoeven vs Herasimchuk) but then he has won nine consecutive fights beating Ismael Lazaar (Verhoeven vs Lazaar), Antonio Bigfoot Silva (Verhoeven vs Silva) and Jamal Ben Saddik in 2017 (Rico Verhoeven vs Jamal Ben Saddik 2).
His opponent, Mladen Brestovac, has an official record of 56-13-1 (36 knockouts) and he entered as the No.7 in the same weight class. He lost to Benjamin Adegbuyi in 2016 but then he has won over Daniel Lentie, Dzevad Poturak and Hesdy Gerges. In their first fight Verhoeven defeated Brestovac by unanimous decision (March 12, 2016 – Rico Verhoeven vs Mladen Brestovac I); this second fight, main event of Glory 54, is valid for the Glory heavyweight title. Watch the video and rate this fight!