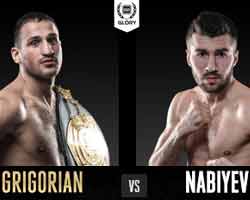 Review by AllTheBestFights.com: 2018-06-02, some good exchanges between Harut Grigorian and Alim Nabiyev but it is not enough to get three stars: it gets two.

The Glory Ww champion Harut Grigorian entered this fight with a pro kickboxing record of 55-11-0 (33 knockouts) and he is ranked as the No.1 super middleweight in the world. He lost to Murthel Groenhart in 2017 (Murthel Groenhart vs Harut Grigorian 2) but then he beat Karim Benmansour, Antoine Pinto in 2017 and he has taken revenge on Groenhart in 2018 (Murthel Groenhart vs Harut Grigorian 3).
His opponent, the 2016 WMC champion Alim Nabiev, has a record of 49-6-0 (21 knockouts) and he entered as the No.3 in the same weight class. He lost to Diogo Calado in 2016 but then he has won six consecutive bouts beating Jimmy Vienot, Nieky Holzken (Nieky Holzken vs Alim Nabiev) and Cedric Doumbe in his last three (Cedric Doumbe vs Alim Nabiev). Grigorian vs Nabiyev is valid for the Glory welterweight title (Grigorian’s first defense); undercard of Rico Verhoeven vs Mladen Brestovac 2 – Glory 54. Watch the video and rate this fight!