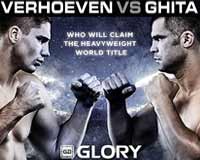 Review: 2014-06-21, disappointing fight between Rico Verhoeven and Daniel Ghita: it gets two stars. Rico Verhoeven entered this fight with a professional kickboxing record of 43-7-1 (8 knockouts) and he is ranked as the No.1 heavyweight in the world, he is 25 years old (8 years younger than Ghita) and he suffered his last defeat in 2012 when he faced Semmy Schilt, since then he has fought five times winning the Glory Hw tournament at the end of 2013 beating Daniel Ghita in the final (=Ghita vs Verhoeven).
His opponent, Daniel Ghita, has an official record of 50-10-0 (39 KOs=78%) and he entered as the No.2 in the same weight class, after his last loss against Verhoeven he fought once defeating Errol Zimmerman (=Ghita vs Zimmerman 2). Ghita vs Verhoeven 2, main event of Glory 17, is valid for the Glory heavyweight title. Watch the video and rate this fight!