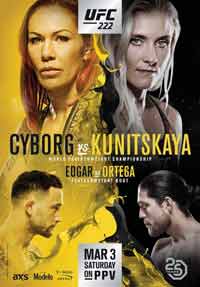 Review by AllTheBestFights.com: 2018-03-03, pretty good fight between Cat Zingano and Ketlen Vieira: it gets three stars.

Cat Zingano entered this fight with a pro record of 9-2-0 (89% finishing rate) but she is not ranked as he hasn’t fought since July 9, 2016 when she was defeated by Julianna Pena (Cat Zingano vs Julianna Pena); before this bout, in 2015, he had also lost to Ronda Rousey (Ronda Rousey vs Cat Zingano).
Her opponent, the undefeated black belt in Bjj and judo Ketlen Vieira, has a perfect mma record of 9-0-0 (67% finishing rate) and she entered as the No.3 women’s bantamweight in the world. ‘Fenomeno’ Vieira fought twice last year winning over Ashlee Evans-Smith and Sara McMann. Zingano vs Vieira is on the undercard of Cris Cyborg Justino vs Yana Kunitskaya – UFC 222. Watch the video and rate this fight!

(Free embeddable video hosted on Youtube and not uploaded by AllTheBestFights)
https://www.youtube.com/watch?v=-pfSPDK_nds