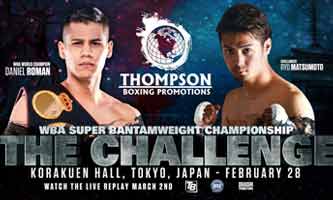 Review by AllTheBestFights.com: 2018-02-28, good fight between Daniel Roman and Ryo Matsumoto: it gets three stars.

The Wba super-Bw champion Daniel Roman entered this fight with a professional boxing record of 23-2-1 (9 knockouts) and he is ranked as the No.7 super bantamweight in the world (currently the #1 in this division is Jessie Magdaleno). He suffered his last loss when he faced Juan Reyes in 2013, since then he has won 15 consecutive fights beating Adam Lopez (Roman vs Lopez) and Shun Kubo in 2017 (Shun Kubo vs Daniel Roman).
His opponent, Ryo Matsumoto, has an official record of 21-1-0 (19 KOs=90%) and he entered as the No.10 in the same weight class. He lost to Victor Uriel Lopez in May 2016 but in December he took revenge on him and in 2017 he won over Hideo Sakamoto, Hendrik Barongsay and Jason Butar Butar. Roman vs Matsumoto is valid for the WBA World super bantamweight title (Roman’s first defense). Watch the video and rate this fight!