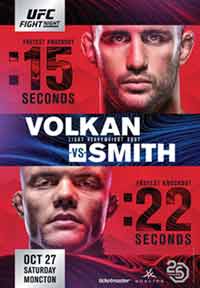 Review by AllTheBestFights.com: 2018-10-27, some good single shots between Gian Villante and Ed Herman but it is not enough to get three stars: it gets two.

Gian Villante entered this fight with a pro record of 16-10-0 (75% finishing rate) and he is ranked as the No.31 light heavyweight in the world. He has already fought twice in 2018 beating Francimar Barroso (Gian Villante vs Francimar Barroso) and losing to Sam Alvey.
His opponent, the black belt in Brazilian jiu-jitsu Ed Herman, has an official mma record of 23-13-0 (83% finishing rate) but he is not ranked as he hasn’t fought since July 7, 2017 when he was defeated by CB Dollaway; before this bout he had also lost to Nikita Krylov in July 2016 (Nikita Krylov vs Ed Herman) and he had won over Tim Boetsch in January. Villante vs Herman is on the undercard of Volkan Oezdemir vs Anthony Smith – UFC Fight Night 138. Watch the video and rate this fight!

(Free embeddable video hosted on Youtube and not uploaded by AllTheBestFights)
https://www.youtube.com/watch?v=eHdzbgnwYJ4