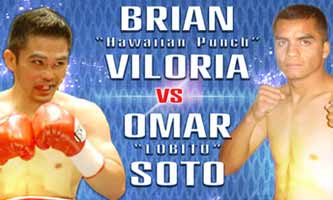 Review by AllTheBestFights.com: 2015-07-25, fight not particularly good between Brian Viloria and Omar Soto: it gets two stars.

The former world champion in two different weight classes Brian Viloria entered this fight with a boxing record of 35-4-0 (21 knockouts) and he is ranked as the No.6 flyweight in the world (currently the #1 in this division is Roman Gonzalez) while his opponent, Omar Soto, has an official record of 23-11-2 (15 knockouts) but he is not ranked as he hasn’t fought since September 7, 2013 when he was defeated by Toshiyuki Igarashi. Viloria suffered his last loss in 2013 when he faced Juan Francisco Estrada (=Viloria vs Estrada), after this bout he has won three consecutive fights beating Armando Vazquez in his last one. In the first clash between Viloria and Soto, Brian won by split decision. Watch the video and rate this fight!